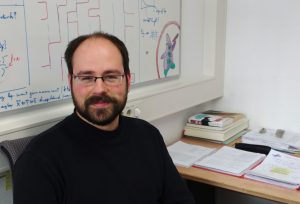 After the PCS master, I did a PhD at the « Institut de Physique Théorique » (IPhT), CEA-Saclay, under the direction of Dr. Kirone Mallick. The subject was the statistics of a current of particles in a model of transport on a 1D lattice with hard-core interactions, i.e., the Asymmetric Simple Exclusion Process (ASEP), often referred to as the Ising model of out-of-equilibrium physics. I got thus interested in the large deviations theory and in quantum integrability. After that I spent two years in Louvain, Belgium, for a first postdoc with Prof. Christian Maes (Intituut voor Theoretische Fysica, KU Leuven). I studied continuous stochastic processes (diffusion) and I got involved into more general problems in out-of-equilibrium statistical physics. I am now doing a second postdoc in Luxembourg with Prof. Massimiliano Esposito (University of Luxembourg), where I study the relation between the concept of locality and the concept of coarse-graining in out-of-equilibrium statistical physics and in large deviations theory.